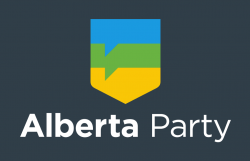 The Alberta Party was founded in 1985. Formerly right-leaning, the party merged with the progressive Renew Alberta group in 2010 and took a centrist stance to find new supporters.

The party began as part of the Alliance Coalition of small, right-wing parties. The Alliance fielded several candidates in two 1992 by-elections and the 1993 general election, but only received a small portion of the popular vote. The coalition did not contest in the 1997 election.

The party only ran four candidates in 2004 and one in 2008; neither election won them any seats. The party adopted their centrist stance in 2010 and began the creation of new policy. In January 2011, the party gained its first MLA when former Liberal Dave Taylor crossed the floor. Also in 2011, the Alberta Party elected former Hinton mayor Glenn Taylor as their leader with 55 per cent of votes.

During the 2012 election, the party nominated 38 candidates, but none were elected. Following the election, Glenn Taylor stepped down as leader.

After remaining leaderless for a year, the party elected Greg Clark as the leader of Alberta Party during a September 2013 general meeting. During the leadership election, Clark was endorsed by 87 per cent of members. Clark stepped down as leader in 2017 to trigger a leadership contest, and four months later, Stephen Mandel (formerly Minister of Health in the Alberta Government, former Edmonton city councilor and former Edmonton mayor) won the race to become the new leader of the Alberta Party.